The trolleys that ran from Derry to Chester were called electric cars. They began in 1886 and the track 7 ¾ miles long. This trolley not only carried people but also brought milk, mail and freight. After 1919 the popularity diminished from the competition from the automobile. The last trolley ran in 1928. The Company was owned by 2 Derry families. Construction began in May 1896. 150 imported track laborers and many local men were employed to grade, lay the cedar railroad ties and spike down the steel T-rails. Importantly it began at the Boston and Maine Railroad at Railroad Square in Derry to further transportation of freight and people. Land was taken by eminent domain. Entering Chester the track ran up Derry Road turned into where the Granite State Telephone Company is now and stopped east of Wilcombs Store  and convenient to the Chester Inn, which was at the westerly end of Geromes Ice Cream Shop now until it burned down. Poles were installed which feed the railways cables and later the telephone wires. Amazingly an 18 foot high trestle was built to accommodate the big dip in the road going from Bell Hill to the Chester St. The electricity came from the Derry Electric steam plant. Oh what a celebration took place for Chester when the first trolley rolled into town! Houses were decorated with buntings, ringing of bells and several hundred people came in front of the Hotel. Derry Brass Band, dinners and socials took place with many speeches. And cannons were fired (most likely the cannons Don Brown rebuilt a couple of years ago). The schedule was made to coincide with the B&M Railroad in Derry. The timetables were adjusted in the summer for the influx of city people coming to Chester for its cooler temperatures and constant breeze high on its center of town. More than 127,000 passengers traveled on the trolley between Oct-June during the first year. The passenger trains only had a hand brake and two crew which were a motorman and a conductor. There were open and closed passenger cars, freight cars and snow plow cars. Oh boy!! This is when Chester became a booming town! There were at least 14 Inns or boarding houses due to the trolley coming to town. Many people opened their homes to cash in on this trade.  Also the trolley made travel easier during the muddy spring months getting up our high hills! Feb. 5th a storm of the century hit Chester and the travel was suspended on the trolley line until St. Patricks day.  80 men Chester and 100 from Derry shoveled out the tracks! Chester residents could now take a pleasure ride to Beaver Lake Pavilion, bring their wares to be sold in Derry and students could travel to Pinkerton and adults were now employed at Derrys shoe factories. Special tickets were issued for students and workers. The Chester Historical Society which is open the second Sat. 10-12 every month has some interesting memorabilia from the trolley years. Financially the Derry Chester Trolley never made profit and barely covered expenses. Its demise came due to personal transportation, the automobile. The Derry Chester Railroad was closed on June 4, 1928. Today there is no longer a B&M train that goes to Derry. While doing research at the Derry Library on their microfiche of Derry News I found some interesting articles. One written Jan. 5. 1909 includedstopping at John Wasons, her son who recently lost his leg by a trolley car is doing nicely. Aug. 3, 1909rural letter carrier Edson Eastman has purchased a Buick auto for his mail route. Walter Lane still sticks to his trotters.

‘Trolley going over the trestle bridge between Bell Hill and 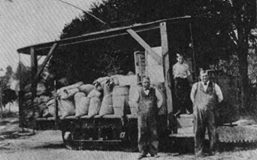